Terrible news coming out of Baltimore…

Jacquelyn Smith was fatally stabbed on Saturday while trying to help a woman she thought was in need.

Ms. Smith was riding in the passenger seat around 12:30 a.m. when she noticed a woman holding a sign that read, “Please help me feed my baby.”

She had her husband stop the car so that she could give the woman a donation.

When Jacquelyn rolled down the window to give the woman some money, a man approached the vehicle and thanked them for the money.

Then, he reached into the car and tried to grab Jacquelyn’s wallet.

The assailant stabbed Jacquelyn in the torso and stole her necklace. The woman snatched her purse and they both ran off.

Jacquelyn Smith died at the hospital. She was 52.

“Right now, we’re trying to identify that suspect. He’s described as a man, possibly in his 30s, with a goatee. We also want to identify the woman that was out there asking for money,” Baltimore police Detective Jeremy Silbert said.

“It’s a heinous act. They’re using this ruse as panhandlers to get the attention of their would-be victims,” said interim Baltimore police commissioner Gary Tuggle. “We also want to caution the public about engaging with panhandlers and recognizing the fact that not all of them have honest intent. Not all of them are in real need.”

Watch the news report below. 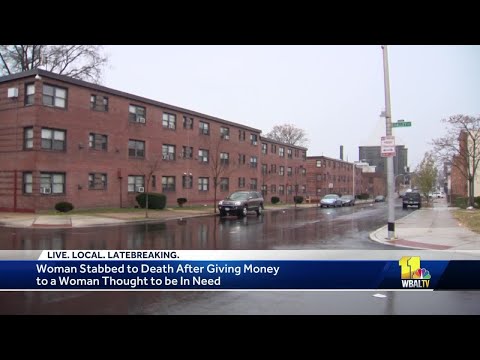 Jacquelyn’s husband, Keith Smith, spoke out and said he will not let his wife die in vain. He’s going to fight to get something done about panhandlers.

Keith Smith, with his daughter beside him, talks to media about how his wife, Jacqueline Smith, was stabbed and later died. Early Saturday Morning she gave money to a woman seeking funds to help feed the woman’s child. A man stepped out robbed and stabbed her. pic.twitter.com/PLUC7ZGvJV

My prayers and condolences to the Smith family.

Film Inspired By Prince’s Music In The Works At Universal

Autopsy Shows EJ Bradford Was Shot 3 Times From Behind, He Posed No Threat To Police